What is Serverless Database? Trends & Benefits 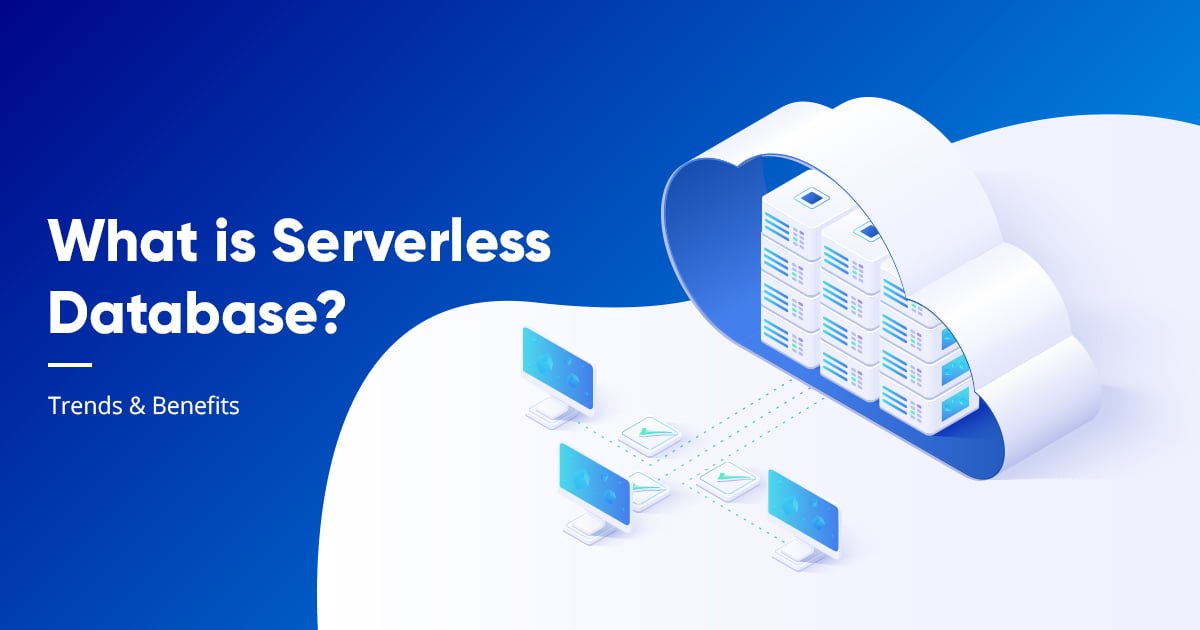 In simple words, serverless computing is a cloud computing model that means that the cloud provider is dynamically managing the distribution of computer resources. A Serverless database is specially designed for a task that is unpredictable and changes rapidly. Serverless databases come in a role because of small developer-facing problems and server crash, as they cannot afford to establish their high capacity database server.

Serverless computing’s main goal is to save companies huge amounts of time, money, and resources by hosting, running, and managing applications and the main functions of a business. Just like wireless communication has wired(wired-network setup) somewhere. Similarly, serverless architecture also has a server somewhere.

Serverless is cloud architecture that helps hosts (creator/developer) to upload their application file on it. Also, manage the internet traffic of applications uploaded. Moreover, server capacity is dynamic which prevents server and application crashes. Data on serverless is safer and at minimum risk of data loss or failure.

Serverless database providers charge fees as per the usage and traffic of the application.  It is more suitable for almost all applications (smaller and bigger), also the cost of this, is much lower compared to the traditional server. However, if there are more applications of developers on a large scale then it might be more expensive, and the serverless option is not fruitful. Serverless computing still requires servers, and that’s where serverless databases come in.

Setting up a fixed number of servers usually takes a lot of time for underutilization and is much more expensive than using a serverless database. Furthermore, it is not cost-efficient but also be more budget-friendly than provisioning an autoscaling group because of the more efficient bin-packing of the machine resources. Most importantly, there are no operating system costs which include the installations, maintenance, support, licensing, and patching. Its charges are totally dependent upon the used time and memory allocated on running your code.

No Limit on Scalability

Due to automation, all functions of the application will be able to work in parallel and with data consistency. As well as a small developer team not required to set a high capacity server.

One of the most fruitful advantages of a serverless computing model is that companies will see developer efficiency. Designers are not required to invest energy in managing and operating a framework. Lots of surveys conducted with engineers are spending somewhere in the range of around two-fifth of their time with infrastructure-related works. If developers choose serverless, it’s almost sure that one can solve troubles.

Debugging is the biggest problem. It’s directly caused due to architectural complexity, which is one of the biggest challenges.

It totally depends on the actual usage of the application, so it is very difficult to estimate before usage. In most cases, Serverless architecture is very cost-effective; however, it can become more expensive than creating and maintaining our own server.

Vendor lock-in ended up is also a challenge, which makes a lot of sense. There is enough difference between the serverless providers, that migrating from one to another isn’t worth the cost most of the time. It’s difficult to change the serverless provider. It’s also next to impossible to correctly guess the time and effort it’d take.

There are various well-known databases already in the market.

Google Cloud Store is a document-oriented store offering a database component of Google App Engine as a standalone service.it is owned by Google which is one of the biggest IT companies in the world. There are two payment options in the Firebase: (1)a fixed plan and (2) a pay-as-you-go plan out of which the user can choose anyone who is more suitable. Firebase also includes a hierarchical database.

FaunaDB is distributed all over the world, and its technology is based on Twitter. it is the most significant transactional database service.

Amazon Aurora Serverless was launched at the end of 2017. It comes in two different variants compatible with both MySQL or PostgreSQL, moreover, it is also compatible with other known systems like MariaDB, Oracle, etc. Amazon Aurora serverless database is fully-managed and automatically scales to up to 64 terabytes of database storage.

It is also an Amazon service. DynamoDB is an entirely managed NoSQL database service able to provide predictable and high-speed performance with smooth scalability. DynamoDB creating database tables is straightforward and you can store and retrieve any amount of data, and it’s also able to manage any level of internet traffic on our application.

MongoDB is open-source and free, published by GNU Affero General Public License. While not being a serverless database MongoDB is still worth mentioning because of their Database as a Service offering called MongoDB Atlas. It is most flexible in storing the data.

The serverless computing revolution is yet new to the IT industry, and it is taking some time for databases to catch up. There are lots of new functions and options which will add in the future. Furthermore, the future of Serverless Databases looks more promising and more preferable. The features of this modern technology have enabled us to concentrate on crucial things such as real-time access, availability, security, and scalability. However, it is not feasible to discard or surpass the usage of the existing database(traditional database) in a short time. Yet, there are limitations in serverless databases that might be overcome in the future.

In order to create a true Platform-as-a-service environment, it is important to understand serverless technology and address them in the upcoming years. We are a true partner to help you set up your serverless database and help you in the cost reduction of the business. Contact us today or get in touch via sending an email at sales@aliansoftware.net.